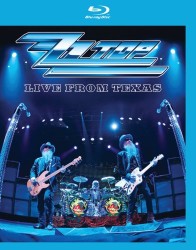 ZZ Top, the “little ol’ band from Texas”, has enjoyed enormous success on a global scale since their breakthrough in the early seventies and then their groundbreaking albums in the mid-eighties. Now for the first time one of ZZ Top’s legendary live performances has been filmed for simultaneous release on DVD & Blu-ray. The track

ZZ Top, the “little ol’ band from Texas”, has enjoyed enormous success on a global scale since their breakthrough in the early seventies and then their groundbreaking albums in the mid-eighties. Now for the first time one of ZZ Top’s legendary live performances has been filmed for simultaneous release on DVD & Blu-ray. The track listing spans their career from early tracks such as “Waitin’ For The Bus”, “Just Got Paid” and the classic “La Grange”, through their eighties blockbusters including “Gimme All Your Lovin’” and “Legs” (complete with furry guitars!) and up to more recent hits like “Pin Cushion”. Filmed in their home state of Texas in front of a wildly enthusiastic audience, this DVD & Blu-ray captures ZZ Top at their very best.

BONUS FEATURE Poker Game – Billy Gibbons, Dusty Hill & Frank Beard talk through the history of ZZ Top over a game of poker. Dallas Show Day – Behind the scenes on the ZZ Top live show. Photo Shoot – On location with ZZ Top for a typically iconic photo shoot. Bonus track – ZZ Top perform Jimi Hendrix’s “Foxey Lady” live on stage. That Little Ol’ Band from Texas comes up big in ZZ Top: Live from Texas, a concert recorded in Dallas in November, 2007. The hirsute trio (guitarist Billy Gibbons, bass player Dusty Hill, drummer Frank Beard) has been at it for nearly four decades now, and notwithstanding their synth-tinged commercial breakthrough in the ‘80s, they haven’t changed a whole lot in that time–not that that’s a bad thing, as ZZ Top is still essentially a fine, gut-bucket blues band. In the course of this 80-minute gig, they dig deep into the back catalogue, mixing in tunes from ‘70s albums like Tres Hombres, Rio Grande Mud, and Fandango, as well as more recent items from the multi-platinum Eliminator. Their themes (cars, women, good barbeque) are as eternal as their beards are long (well, not Beard’s beard; the fact that he doesn’t have one remains a source of ironic amusement), their shtick is effortlessly cool, their presentation is minimal (calling Gibbons and Hill’s moves “dancing” would be a major stretch), and their stage show is modest by Big Rock Show standards; the crowd eats it all up, especially when the band careens into a set-closing string of hits including “Legs,” “Sharp Dressed Man,” “La Grange,” and, of course, “Tush.” This is the only ZZ Top concert performance out there, and while it has occasional shortcomings (in terms of both performance and technical aspects), it’s a fine example of a veteran band that remains a potent live attraction despite long-dwindling clout as record sellers.

As is often the case, the principal appeal of the Blu-ray edition of this title is its crisper visuals and especially its highly enhanced sound. Bonus material is the same as other releases, highlighted by Gibbons, Hill, and Beard playing poker while reminiscing about everything from opening for the Rolling Stones and the menagerie (buzzards, longhorn steer, tarantula, etc.) that accompanied the band on a long ago tour to Paula Abdul’s attempt to teach the boys some dance steps (the results speak for themselves). Their version of Jimi Hendrix’s “Foxey Lady” is pretty cool, too. –Sam Graham